An Officer of The Salvation Army is the Pastor and leader of each Corps. From fledgling outpost to self-sustaining Citadel, the Williamsport Corps was and still is led by those who are called to serve the Kingdom of God through The Salvation Army.

The Salvation Army, an international movement, is an evangelical part of the universal Christian Church. It's message is based on the Bible. Its ministry is motivated by the love of God. Its mission is to preach the Gospel of Jesus Christ and to meet human needs in His name without discrimination.

Motivated by the love of God and concern for the needs of all humanity, The Salvation Army in Willamsport, PA offers a variety of programs and activities to meet the physical, emotional, and spiritual needs of people of all ages.

In 1865, William Booth spent his days and nights preaching the gospel of Jesus Christ to the poor, the homeless, the hungry and the destitute people of London, England. In his attempt to reach these people, Booth challenged the accepted concept of church and took his preaching to the streets. Booth traveled throughout England conducting evangelistic meetings. Booth's services were an instant success. He quickly became well known as a religious leader throughout London and attracted followers who were dedicated to fighting for the souls of men and women.

In 1867, Booth had only 10 full-time workers, but by 1874, Booth's followers had grown to 1,000 volunteers and 42 evangelists. At this time, the group was serving under the name "The Christian Mission." The group officially adopted the title of "The Salvation Army" in August of 1878.

The Army In America

The following historical accounts were made possible by the dedicated research and hard work of David W. Aston, who presented his findings to the Williamsport Corps on the occasion of the 85th Anniversary of The Salvation Army's ministry in Williamsport.

The Army Opens Fire On Williamsport 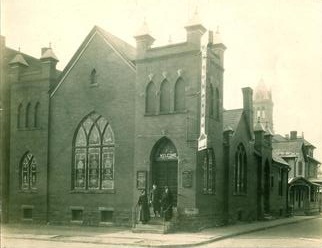 It's a cool evening in the winter of 1885. On Fourth Street, a noisy procession is taking place. As it draws closer, one can see a banner waving above the crowd, with the standard reading: "THE SALVATION ARMY." The battle to save souls that had begun twenty years earlier in the slums of London has opened a new front.

The work of The Salvation Army in Williamsport was started by a group of five Salvationists from the Elmira, New York area. The group, consisting of three women and two men, was headed by Captain Albert White.

On Friday, January 23, 1885, the Army arrived in Williamsport. The "expeditionary force" paraded up Fourth Street and down Third Street singing, playing tambourines, and praising God. They marched up Market Street to the Company B Armory, followed by a large crowd of curious onlookers. In that building, across from the old First Presbyterian Church, the first Salvation Army Meeting held in Williamsport took place.

The meeting began just before eight o'clock PM. It consisted of singing, prayer, exhortation and instrumental music. The meeting was commenced by the congregation singing "In The Sweet Bye And Bye." While they were singing, the lassies from the band sold Salvation Army Song Books for ten cents per copy. No attempts were made to disrupt the service.

The following Thursday, Captain White led the first open-air service on the steps of the Court House. The meeting was conducted in the typical Army style, with much singing and praise. A crowd of several hundred people gathered around. Again no attempt was made to disturb the service. At the conclusion of the Service, they marched down Third Street and into Company B Armory, where they had set up temporary headquarters. The crowd followed and many were saved. In recording the first open-air, the press reported: "...(they) certainly showed great faith, kneeling on the cold stones with temperature as low as it was last evening."(Daily Gazette and Bulletin, 1/20/1885) Their "great faith" was to become essential to the survival of The Salvation Army in Williamsport. They were to suffer one set-back after another in the coming years.

Williamsport had received the Army with curiosity. As the weeks rolled on, opposition grew as the citizens became more against the Army's loud (and sometimes riotous) method of spreading the Gospel.

One Saturday night in May, 1885, the police raided the Army meeting hall on a complaint of "riotous conduct." No arrests were made but the Salvationists were informed by Chief of Police Coder that they could hold no more street parades.

On May 19, 1885, six Salvationists were arrested by order of Mayor S. M. Crans for disturbing the peace. Those arrested were Captain White, Phoebe McLaughlin, Mrs. William DePue, C.H. Winters and George Jones. They were ordered to answer the charge in court the following day.

At the hearing, a drug store owner claimed that these "insane pests" were ruining his business. He testified that the people who gathered around the street services were entering his store and disturbing his customers. Other witnesses said, in effect, that the Army should be driven from the city.

Captain White was then called to testify. The Judge offered to drop the charges if the Army would "pack up and leave town." Captain White refused the Judge's offer. He proposed that singing and tambourine playing be taken out of the services and that an officer be hired to keep order in the meetings. The Judge accepted his proposal, fined the Salvationists, and released them. For the time being, the Army was secure, but it was clear that the people of Williamsport did not want it to stay.

There were many other instances in which Salvationists were arrested. One, in June 1885, in which the Salvationists were charged with "blockading the streets," brought a sharply critical response from the Milton, PA press. They strongly supported the work of The Salvation Army and thought the charges were unfair. They pointed out that when the crowds gathered around street peddlers, nothing was done. Why, then, they asked, were the Salvationists arrested when they tried to spread the Word of God?

The pioneer Salvationists who opened the Army's work in Williamsport saw their arrests as opportunities to spread the Gospel. Even while in prison, they sang and spoke of God's love.

The Army continued its work despite opposition. In 1892 The Salvation Army added Williamsport to the Disposition of Forces. However, the Army became so widely opposed that most meetings had to be held in secret. In 1895, just three years after it was recognized, the Williamsport Corps was dropped from the Disposition.

The Army never died and in 1900 Ensign and Mrs. Savage came to Williamsport as Commanding Officers. This time they took a bold step and came out as openly as possible. But this attempt was even less successful than the first and in 1902, only two years later, Williamsport was, for the second time, dropped from the Disposition of Forces.

But the never-say-die Salvationists still refused to be defeated. On November 30, 1907, they tried for a third time. Adjutant George N. Wiggins came to officially open the Williamsport Corps. This time there was no opposition. In Januray of 1908, the Williamsport Corps was added permanently to the Disposition of Forces. The uphill fight was over.

Two World Wars, each costing millions of lives, struck the world and had a jarring affect on the United States. When war struck, The Salvation Army was ready, willing and able to assist whatever the need that might have been and wherever it might have arisen.

On the local level, the Army gave encouragement to the boys going "over there." Salvationists all over the world prayed for the soldiers and for an end to the war. The Army in Williamsport prayed as earnestly as it did anywhere else in the world.

In the years of depression, the Army lasted, by the grace of God, even though it was on the verge of financial collapse. Whenever possible, assistance was given to those in need. The Army passed its second critical test.

During these years, two floods ravaged the Williamsport area. Ready on the spot, The Salvation Army offered disaster relief to those in need.

The years of war and depression are hundreds of individual stories of joy and sorrow; of hope and despair. These stories illustrate the faith that helped The Salvation Army survive this difficult period of its history.

The Army At Work

An open letter to the Editor of the Daily Gazette and Bulletin gave a good picture of the Army's work in 1885. It described the earnest prayer for sinners offered by al  Salvationists. Men were urged to come to Christ then and there. The old Prebyterian Church was filled with those anxious to hear the "Sound Gospel Truth." Two hundred young men, who had never before attended church, were there hearing the Gospel for the first time.

Times may change, methods may vary, but the message is ever the same: "Christ for the whole wide world."

Praise Him With Melody

The Salvation Army is noted for its excellent musical forces. As time went by, Williamsport had become an increasingly better part of this musical force. In the Williamsport Corps, there has been a songster brigade, a brass band, a string band and a timbrel brigade.

In April of 1925, George E. Newman, a noted musician from Banford, Ontario, was appointed Bandmaster. B/M Newman, formerly Bandmaster of the famous Croyden (England) Band, intended to increase the band's size to thirty pieces. He turned the band into the finest in the history of the Corps.

The Williamsport Songster Brigade passed an important milestone on Easter Sunday, 1968, when it presented its first Cantata, "Hallelujah, What A Savior!" by John W. Peterson

A string band, organized in 1966, consisted of the following instrumentation: accordion, ukelele, guitar, autoharp and violin.

The timbrel brigade, also organized in 1966, had seven active members.

From Armory To Citadel

When the Army opened its work in Williamsport, the meetings were held either in the Company B Armory or the old vacant Presbyterian Church, both on Market Street. The first permanent citadel was an old decaying storefront at 317 Market Street.

In July 1923, Captain Alfred Woodward announced that the Army had purchased the First Evangelical Church at the corner of Market and North Streets. (The storefront location) was sold to Stern Brothers, a local business concern.

On December 1 and 2, 1923, the new citadel was dedicated. Saturday, December 1, was the flag raising. Ensign C.B. Abram presided. The Mayor of Williamsport gave the address of welcome. Brigadier H.D. Bale, Divisional Commander, spoke for the Army. Rev. W.J. Conrad spoke on behalf of the city ministers. Jesse S. Bell, president of the Chamber of Commerce, spoke for that group. W.J. Dale spoke for the Salvation Army Advisory Board. Mrs. Robert Fleming raised the American flag and Mrs. Captain Woodward raised The Salvation Army flag. Vocal selections were offered by Mrs. Brigadier Bale and Mrs. Marshall. The Corps band presented a concert that evening.

(In 1970,) Brigadier Clyde R. Waldman announced the completion of a $500,000.00 plus drive for the contruction of a new citadel, to be built on the site of the existing citadel. (The existing building was dedicated June 6, 1971.)

"Fighting for right and opposing the wrong,

The Salvation Army is marching along!

Soldiers of Jesus, be valiant and strong;

The Salvation Army is marching along." 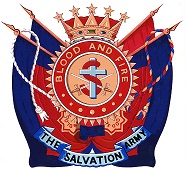 For more detailed information and an in-depth look at the history of The Salvation Army, visit The International Heritage Centre.