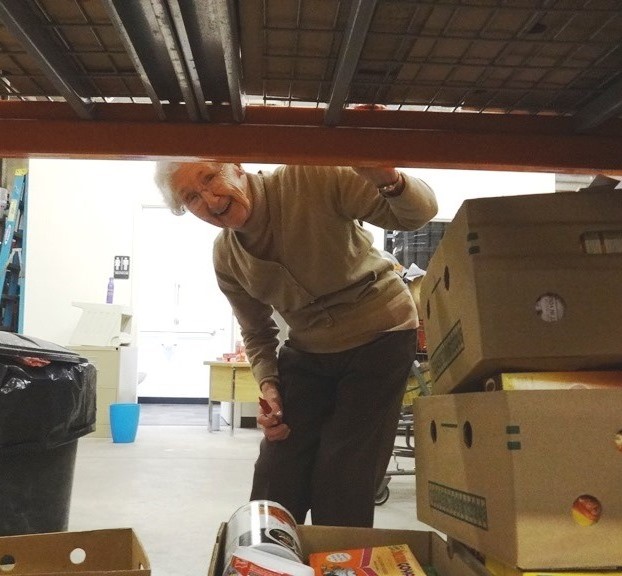 After serving for 12 years in England, Scotland and Wales, the Majors came to America, where they spent the rest of their active years in the central territory (Wisconsin, Michigan and Illinois) before retiring to Pennsylvania to be close to their  beloved son Raymond Jr., daughter in law Judy and grand daughters Madelyne and Emma.

"My son wanted us to move to Pennsylvania but we weren't sure if we would like it here," Major Tregellas explains in her delightful Scottish accent. "I knew where the local Salvation Army was before we even came to investigate the area," she continues. "I walked in the front door and saw Maggie (longtime secretary Maggie Lesh) in the front office, Bob (Gueiss) was downstairs sorting toys and retired Officer Brigadier Lance greeted us so warmly. We were welcomed with open arms. After our visit that day, we decided that this was where we were supposed to be," Major Tregellas said.

To the delight of Raymond Jr., and the benefit of The East Stroudsburg Salvation Army, the Majors moved to Monroe County shortly thereafter. Major Tregellas has been volunteering in our food pantry for the past 10 years.  When asked why she decided to volunteer in our food pantry, she answered, eyes twinkling, "Because I felt this is where the people were."

"And thank the Lord for that," interjects fellow volunteer Sue Werkheiser. "Mrs. T is so comforting. She's just what people need," she continues. "People who come to the pantry are vulnerable, sad, depressed and sometimes humiliated. They break down crying and we always send them to Mrs. T. She spends whatever time it takes until that person feels better, uplifted. We don't just supply financial assistance and food here. We also fill a "spiritual hunger" inside of people. Mrs. T comforts everyone she encounters and she really has no idea the effect she has on people. It's beautiful."

Jill Brink, Food Pantry Coordinator couldn't agree more. "Being in Mrs. T's presence is to be in the presence of peace. She has an inner peace that she passes onto other people," she says. "Her spirit is with the Lord and she passes that on to everyone."

"Mrs. T is so caring and will do anything to help anyone. After being with her, people leave here better than they came," raves Lewann Stewart, Assistant Food Pantry Coordinator. "Her faith is what gets her through and some days, it's what gets us all through."

But living in faith is a way of life for Major Tregellas. "I don't know any differently," she insists.  Mrs. T is often described by colleagues as  a true prayer warrior, a kind, loving, caring and compassionate servant of the Lord.  Major Tregellas does not only touch the lives of those we serve; she touches the lives of everyone who has the privilege of being in her presence. "She's been my mentor," says Gloria Loew, Salvation Army employee, fellow Salvationist, and personal friend of Major Tregellas. "She is not afraid to roll her sleeves up and work. She does whatever is needed, right along side you."

Major James Gingrich, Commanding Officer of the East Stroudsburg Corps adds, "She is a perfect example of what a Salvation Army officer should be. She is always supportive, always positive and always Christ-like."

When she is not logging 80+ volunteer hours per month (double that number during the Christmas season) in our food pantry, Major Mary is providing pastoral care to those in need. In 2014, our pastoral care team visited over 3,400 people in nursing homes and hospitals, spreading joy, giving comfort and offering spiritual guidance when needed.

When she's not serving at the Corps, Major Tregellas enjoys reading, cooking and keeping in touch with friends and family all over the world and at 88 years young, she has no intention of slowing down.  "I feel terrific," she says playfully while raising her arms to the sky. "This is my life and I'm blessed," she says humbly. "I can't imagine ever having done anything else. The opportunities to help people are tremendous here. It's what I'm meant to do."