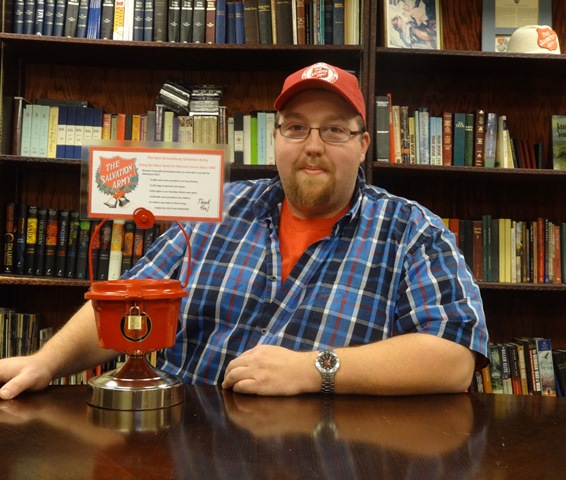 This Christmas season, volunteer Jason Lesh has taken over as the Salvation Army's Counter Top Kettle Campaign Coordinator and he is already taking the yearly campaign to new heights. While most of us associate the Christmas season with happy family gatherings, there are many whose holiday spirits are crushed by the harsh realities of simply making ends meet.

The East Stroudsburg Salvation Army's annual Red Kettle Campaign is the single most important fund raising effort undertaken by the Army, raising in excess of $100,000 each year and logging more than 5,000 hours of volunteer time. Major James Gingrich, commanding officer in East Stroudsburg said, "The Salvation Army will provide food, clothing and emergency assistance to people in real need in our community at Christmastime as we've done for 150 years in America. We need to raise $150,000 to accomplish this." The Counter Top Kettle aspect of the campaign is vital to its success.

Our Counter Top campaign is no small effort. Jason started contacting Monroe County businesses in June to solicit participation. "My goal this year was to secure 40 stores. I thought it would be a challenge but there was more support than I expected. I went to the ends of the earth in Monroe County this year and businesses reacted so positively to the campaign," Jason said pleased. "We depend on local business support and thankfully, they responded wholeheartedly."

"Out of the 36 businesses that participated last year, 33 agreed to participate again this year. And two of those 3 are closed," Jason said. This year, he's raised the bar by securing a whopping 53 locations. A few of the new participating locations are Wendy's, Compton's Pancake House, The Cheesecake Factory, The Christmas Factory, Vincent's Deli in Tannersville , Petrizzo's Restaurant and Pocono Community Theatre.

"Jason's leadership placing the Counter Tops this year has taken it to a whole new level of participation. His efforts have resulted in almost doubling the number of locations, and he did this totally on his own initiative, just stepping up and getting the job done," said Harry Lee, Red Kettle Campaign Chairman.

When Jill Brink, our Food Pantry and Volunteer Director asked Jason to take over the Counter Top Campaign this year, to her, it was a natural fit. "Jason is very detail oriented, he's good with people and he cares deeply about our organization," Jill said. "It's just a perfect fit."

Jason is no stranger to the Salvation Army and its mission. His parents, Ron & Margaret are pillars of the church, both lifelong soldiers. Jason and his wife Stephanie, our Soup Kitchen Coordinator, are raising their own children, Emily, 11 and Riley, 7 in the Salvation Army church.

Dedicated, hard working, loyal, passionate and resourceful are the most commonly used adjectives to describe Jason. On top of working multiple jobs and being a devoted husband and father, Jason continues to find time for the Salvation Army, always pitching in where needed.

"My husband is determined. If he says he's going to do something he does it," Stephanie said. "He loves the Army. He's been here his whole life," she gushed. "He was born into the church and so was I when I married him."

"He loves it here," Stephanie said through proud tears. "He puts 150% into everything he does. He works his tail off for what he believes in."

"I like helping people. Whatever it is. I'm in," Jason remarked. "I'll do whatever is needed."

Last year, our Counter Top campaign raised $2200, which goes a long way in helping the citizens in our community. Starting this year, the Salvation Army will be presenting the highest grossing location with a Golden Kettle to proudly use next year. The recipient will also receive an award at our Volunteer recognition dinner in February.

This year, we are hoping to meet and exceed last year's figure and with your help, we can do just that. "Please donate generously to any kettle you see," Jason pleads. "Also, you can support the businesses that support us by shopping in their stores."

Our community is blessed to have Jason Lesh working so diligently on its behalf to "Do the Most Good" for the underprivileged people in Monroe County. He is making a real difference and has far exceeded expectations for the Counter Top campaign and we are looking forward to a successful season. For more information on the East Stroudsburg Salvation Army and how you can help, please visit www.salvationarmyeaststroudsburg.org.