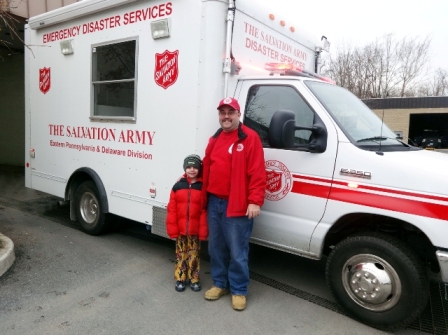 Dave Morton is no stranger to the Salvation Army, or to Monroe County. Dave has been a member of the church his entire life and has been volunteering in the Emergency Disaster Services (EDS) program for as long as he can remember.

"Bob (Gueiss, former EDS Coordinator) took an interest in me 28 years ago and I've been doing it ever since," Dave said. When it came time for Bob to retire 3.5 years ago, Dave was the obvious choice to take over as EDS Coordinator. Not only is he fiercely passionate about the Salvation Army, he is earnestly committed to the Emergency Disaster Services program and its purpose.

In fact, the EDS program is practically in his blood. Dave's grandfather was one of the men who helped to start the program almost 60 years ago. "Dave's grandfather and the rest of the guys responded to the flood in 1955," Gloria Loew remembers. "Back then, they served food out of the back of station wagons. Whatever it took to help. They would pass out coffee and donuts at fires too," she said.

Disasters come in both natural and man made forms and are always devastating to those involved. With a constant awareness of people's needs, when disaster strikes, The East Stroudsburg Salvation Army EDS crew is on the scene. Our trained volunteers are available 24 hours a day, 365 days a year to meet emergencies by providing hot and cold drinks, snacks and meals to those who need it.

Our EDS Team was recently given the "Pocono Proud "Community Service Award in recognition for their outstanding assistance to law enforcement following the fatal shooting at the Blooming Grove State Police Barracks in October, 2014. Our EDS crew was on site for the entire length of the manhunt, serving over 3200 sandwiches, countless snacks, cases of Gatorade and unwavering support to law enforcement.

Morton, and his wife Anne, are raising their children, Anna and JT, in the Salvation Army church and encourage them to volunteer whenever possible. "I like being with my dad and helping the firemen," says JT Morton. "Me and Anna get to ride in the truck too," he boasts. In fact, the entire Morton family can be found ringing the red kettle bell at Christmas, helping with food distribution, passing out hot coffee at a fire and just about anything else that needs doing.

Dedication to the Salvation Army and its mission comes naturally to Dave. "The Salvation Army means helping others," he says. "It means giving what I can to others that don't have what I do."

It's not always easy to bear witness to destruction and despair though. "The very first call I went on after taking over as Coordinator, was bad," Dave remembers. "It was a fire with a fatality. That was sad, really hard to see. I'm still not used to that part of the job," Dave says.

Our EDS team of faithful volunteers were one of the first Salvation Army canteens to arrive on scene at Ground Zero on September 11, 2001. They also set up trailers at the East Stroudsburg Citadel to collect donations, which were then delivered to the first responders who worked tirelessly for months. During Hurricane Sandy, our EDS volunteers served 3 meals per day to the temporary shelters established in Monroe County.

Serving as EDS Coordinator also means being on call 24/7, 365 days per year. Calls for help through the 911 Control Center come in regardless of weather conditions or time of day. "I like giving back to the firemen. Helping to keep them warm and fed while they're doing their jobs makes me feel great, no matter what time it is," Dave said.

Positive interaction with the community is one of the most vital aspects of being EDS Coordinator, and Dave welcomes everyone he meets with open arms. "One of the most rewarding parts of the job is seeing the smiles on the faces of those we are helping," Dave says, grinning.

"Watching Dave interact with the community is amazing. He just lights up," says Major Mary Francis, Associate Officer. "He loves it. It's totally his thing." Helen Dunning, Dave's mother, agrees, "I'm very proud of him," she brags. "He loves what he does."

The East Stroudsburg Salvation Army is blessed to have Dave Morton as ambassador of its EDS program and serve Monroe County so wholeheartedly. Whether it's to his family, the Salvation Army, or the first responders he is supporting, Dave gives everything he's got. With a warm smile, a hot cup of coffee or a gentle word of encouragement, the number of lives he's touched is immeasurable.

"I don't ever want to give this up," Dave says humbly. "As long as I'm healthy and able, I'm going to do it," he promises. And we thank God for that!