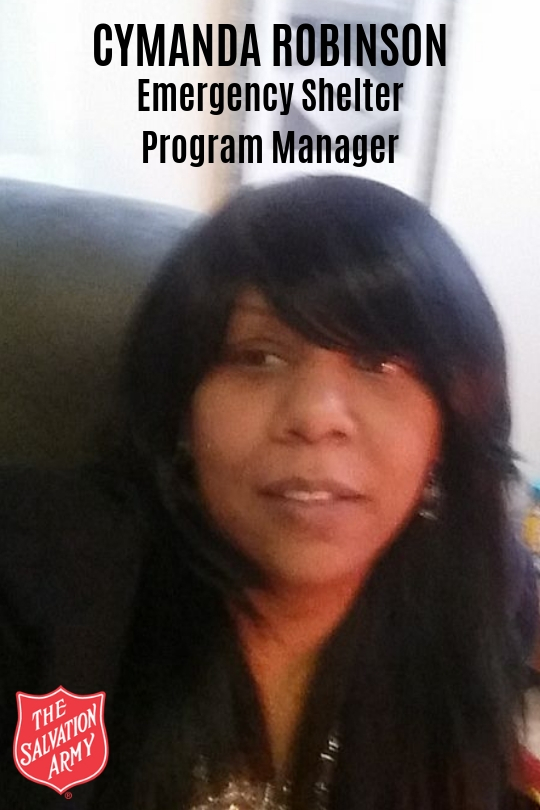 Many years ago, Cymanda Robinson was sleeping on a subway in New York, homeless, tired, hungry, alone and pregnant. As a teenager living in a troubled home, plagued by uncertainty and desperate for stability, Cymanda dreamed of a better life for herself and her unborn child. Determined to make a better way, she didn’t know how she was going to succeed, but she knew it couldn’t happen living at home. With the strength that only a mother knows and her unwavering faith in God’s love, she packed up what little she had and left home, yearning for a better, more productive way of life. Now all she needed was an answer to prayer.

“God sure does work in mysterious ways,” Cymanda says. “There I was curled up on the subway, trying to sleep, when I felt a tap on my shoulder. I looked up to see the kindest, softest eyes I have ever seen.”

Those eyes belonged to Sister Maryjane, who just happened to run a homeless shelter, and who insisted Cymanda “get off the subway and into a bed.”

“Sister Maryjane got me into the shelter and gave me the hope I needed to put one foot in front of the other. I took parenting classes, budgeting classes, emancipated myself, learned how to manage a household and even earned my GED through a program at Fordham University,” Cymanda says fondly. “Sister’s one act of kindness, the compassion she showed me, changed my life.”

And fortunately for us, it also fueled Cymanda’s staunch commitment to advocating on behalf of homeless people wherever she lived. And a fierce advocate she is.

Determined as ever, Cymanda earned her Bachelors Deree in Social Work from the College of New Rochelle and went on to earn her Master’s Degree in Family Counselling at Dobbs Ferry College in NY, all the while working and volunteering in homeless shelters.

Cymanda began her career with The Salvation Army in North Carolina in 2006, Perth Amboy, NJ, New York and Pennsylvania. Fast forward to May of 2018 when Cymanda landed here, at the Salvation Army’s Emergency Shelter in East Stroudsburg, where 62 homeless people have been permanently housed since then. Ahem. You heard right. 62 people!!!

When asked how she was able to accomplish such a remarkable feat, Cymanda says humbly, “Who else is going to do it?”

“When I first began working here, there was a client with her children and mother, who had escaped a violent marriage. She was committed to making a better life for herself and her children,” Cymanda remembers. “Not only did we help her obtain income and housing, we helped her, and her children obtain US Citizenship. That was one of the proudest moments of my life,” she says, wiping the tears away.

Because Cymanda was homeless herself, she brims with understanding and empathy, offering grace to whomever needs it. “We provide services to anyone that needs help. Period. It’s that simple. That is The Salvation Army. And that is why I will always work on behalf of The Salvation Army.”

“But there is still so much work to be done here in Monroe County,” Cymanda reminds us. “It is wonderful to build relationships, teach life skills and return dignity and confidence to our residents. But what we need to remember; what we need to always remember; is that we have a responsibility to educate the community we live in about homelessness. Education is the key to understanding. And understanding is the key to compassion. And compassion is the key that unlocks closed hearts.”