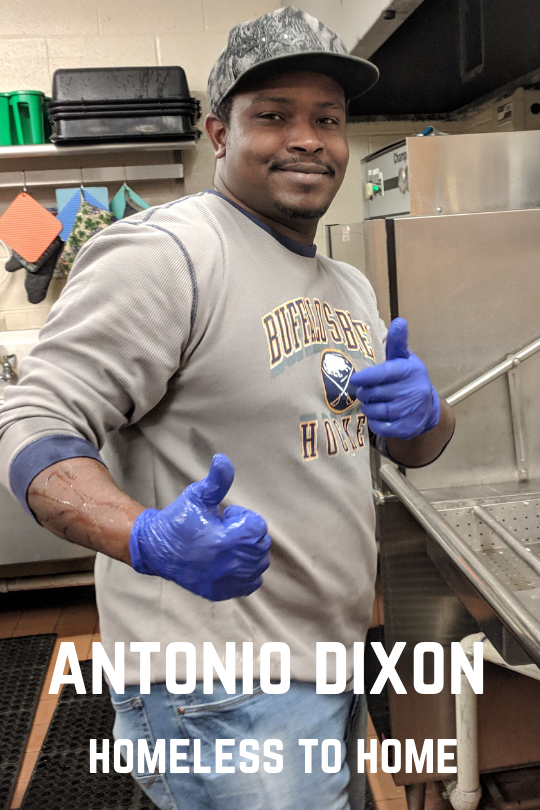 FROM HOMELESS TO HOME

Leaving North Carolina to help a friend in New York, Antonio Dixon never imagined he would find himself homeless in East Stroudsburg, PA. In the summer of 2018, Antonio was brought into The Salvation Army Emergency Shelter program. Today, Antonio leaves our shelter program for all the comforts of home.

“I am ecstatic,” he says. “I’m just so grateful to have a roof over my head and a place to actually call my own.”

“There is a lot of teamwork involved in the intensive case management we provide our shelter residents,” says Shelter Program Manager, Cymanda Robinson. “Antonio is a hard worker and was 100% dedicated to following his plan. He just needed a chance.”

“When I met Antonio, he was trying to get back to North Carolina,” Cymanda says. “I was afraid he was going to up and hitchhike all the way back. I convinced him to stay, take a breather, and give us a chance.”

“Now he’s leaving us, and I couldn’t be prouder,” she continues. “Although, truth be told, I am really going to miss seeing him every morning,” Cymanda says, her voice cracking.

“I believed in Mrs. Robinson,” Antonio said. “It kind of surprised me that these services were available to me. I had no idea. Of course, now I am so glad that I stuck it out.”

“I had a really good feeling when I met Antonio,” says his supervisor, Stephanie Lesh, Soup Kitchen Coordinator, Stephanie Lesh. “And that feeling was spot on. He is dedicated to his job and works so hard to make people happy every day. He was truly an answer to prayer.”

When asked what the best part of his job is, smiling like the cat that swallowed the canary, Antonio replied, “People. Listening to their stories and helping wherever and however I can.”

“Antonio is willing to pitch in wherever he is needed,” Cymanda says. “Before he was hired as Soup Kitchen Assistant, he volunteered anywhere and everywhere in our building. Whatever was needed, staff called Antonio because he is so reliable, dedicated and hard working.”

Even though we bid Antonio farewell and wish him all the very best in his new home, we are thrilled to be able to work with him every day.

“I wouldn’t trade this place for the world,” Antonio says as he puts his hand over his heart. “If I had Oprah money, I would donate half a billion dollars every year to The Salvation Army.”

“And of course, I would still come and volunteer. But I would give up my paid job to someone who needed a chance like I did.”