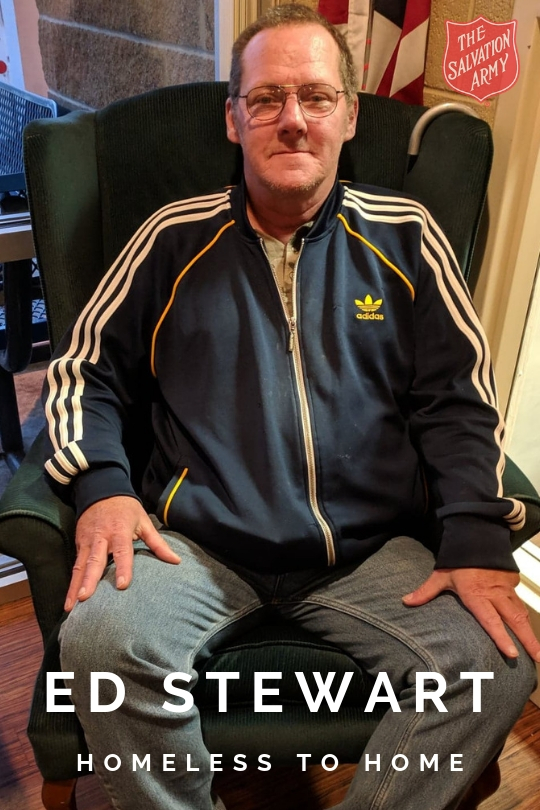 One Man’s Journey From Homeless to Home

Edward Stewart is a happy man these days, which he says, “he hasn’t been in a very long time.” With the help of the Salvation Army Emergency Shelter Program, Ed now finds himself doing something he hasn’t been able to do since 2010; hold the keys to a place called home.

“Finding roommates and an affordable place to live was a problem for me,” Ed says. “I always had a job, I always worked. But I just couldn’t afford much.”

“Affordable housing is a huge problem in Monroe County,” says Emergency Shelter Program Manager, Cymanda Robinson. “We work hard to build relationships with landlords and realtors to advocate on our residents’ behalf.”

“It takes a village to move 33 shelter residents into permanent housing since May 2018,” Cymanda continues, as a proud smile forms. “And our village is strong.”

Edward Stewart agrees. “I became disabled and things got worse. I had surgery on May 17, 2018 and the hospital wouldn’t release me unless I had a place to go. The Salvation Army gave me a bed and a chance.”

“It’s a beautiful thing,” says Shelter Monitor Yamir Vargas-Lopez. “Ed didn’t have a chance before but he does now because it’s a team effort. The Salvation Army builds the bridge for our clients but they have to cross it.”

Since he enrolled in our Emergency Shelter Program, Ed now has income, medical coverage and a way to secure housing. Not a small feat in such a short amount of time.

“There was a lot of effort and a whole lot of determination that went into Ed’s success,” says Cymanda. “Since he became disabled, he was unable to work, therefore he had no income and no chance at finding housing. But we don’t give up and neither does he.”

“Everything is working out,” Ed says softly. “My biggest obstacle was being alone. The Salvation Army gave me a chance. Mrs. Robinson and the staff gave me reason to smile again.” And smile he does. Every day, all day.

“Ed wasn’t smiling when he got here,” Cymanda says. “Now he’s always smiling. He’s always looking for ways to help out and give back. This is a genuinely happy man. And that is everything,” she says, discreetly wiping the tear from her eye, “because if Ed was placed back on the streets, he wouldn’t have survived this time around.”

If you or someone you know are homeless and would like to know more about our Emergency Shelter Program, please call 570-421-3050.